Summer Break from 5th of August till 5th of September 2015 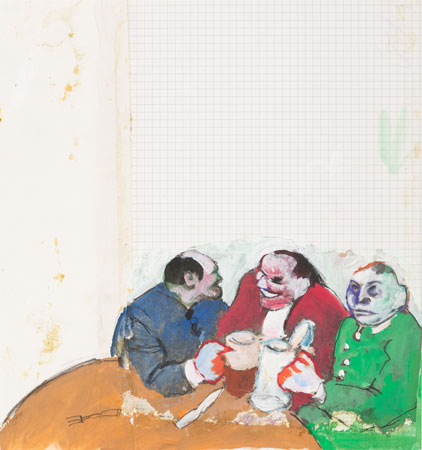 In 2011 we started our exhibition series RENCONTRE, which is supposed to confront our gallery‘s artists with positions outside the program.

This time, in the case of the two painters HEINZ BRAUN (1938 in Munich – 1986 in Munich) and RICHARD VOGL (* 1952 in Furth im Wald), we witness the encounter of two artists who could not possibly differ more from each other. On the one hand we have the Bavarian giant HEINZ BRAUN, who was an active boxer and wrestler delivering letters in the Bavarian city of Germering, before he diverted all his energy into the life of a self-taught artist. What made him change his life so radically was his encounter with Herbert Achternbusch, who, between 1974 and 1979, cast him in significant roles in six of his movies. At the same time his painting in a chaotic and drafty studio in Germering was becoming increasingly important to him. Just like Achternbusch, Braun had an utterly ambiguous relationship with his Bavarian home country, which not only deeply influenced him, but was also the object of the pungent sarcasm revealed in his paintings and statements. Thanks to Jürgen Serke‘s 1982 article in the Stern-magazine, in which Heinz Braun was stylized into a tragical-excessive artistic figure, he made his breakthrough as a painter only four years before his untimely death from cancer.

In contrast to this myth of 15 years of unpredictable painting: Richard Vogl, who was academically trained in Munich by Heinz Butz and Rudi Tröger and has been pursuing his artistic approach in a consequent and sensitive manner for more than 35 years now. Just as Heinz Braun, Vogl in the choice of his motifs is indebted to his immediate surroundings, particularly to the landscape and its people and animals. But his attitude to the things portrayed is on the whole more conciliative, though not free from subtle elements, or as Peter Eikemeier wrote in 2009: “At ease with themselves his artworks reveal rather hesitatingly some kind of roughness, casting doubt on seemingly true facts by their remarkably consistent otherness. (…) Their density and conciseness are characterized by a certain implicitness, a faith in the ultimate order, as inherent in nature‘s creations.“
Despite all their differences, the two painters share not only their motivic reference to rural elements, but also a deeply artistic approach to generating figuration out of color or its materiality.